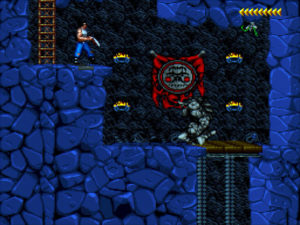 Blackthorne (Blackhawk in the UK) first came my way via the SNES in the ’90s. I bought it from ‘Hidden Levels’, a video game store located near the Beggars’s Bush in New Oscott. A LIDL now stands where the site once was.

Blackthorne is a cinematic platform game developed by Blizzard Entertainment and published by Interplay Productions. Released initially for the SNES, then DOS, in 1994. Blackthorne was later released on the Sega 32X in 1995, Classic Mac OS in 1996, GBA in 2003 and Windows, via a custom DOSBox build, in 2013. 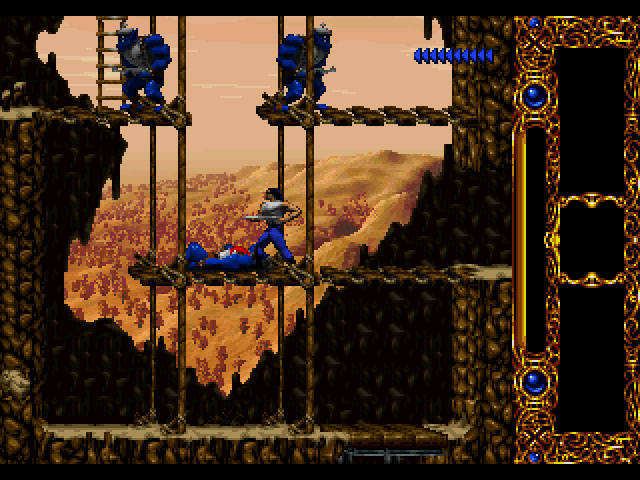 The SNES version immediately had me hooked. Blackthorne easily ranked up there with Another World (Out of this World) and Flashback, although more simplistic in its gameplay. You might get a little Prince of Persia déjà vu when playing. While Blackthorne missed out on the cut scenes that helped make Another World and Flashback the classics they are, it doesn’t really take away anything from the game itself. The music and sound effects on the SNES version more than made up for it in terms of atmosphere.

This time around I opted for the DOS version. I’m using a custom DOSBox launcher (not the 2013 version in case you’re wondering). Music and sound effects really try hard in this version and they’re decent, but aren’t quite up to the standard of the SNES. Admittedly, you can get close if you launch setup and play with the soundcard options but even the best DOS settings are a little off the mark. A password system instead of saves is disappointing as it means you can’t carry inventory items across levels.

Auto-saves take the place of passwords in the 2013 version. You can then load the auto-save point but still with a blank inventory, just like the password system. Starting a new game will overwrite the save file so remember to back it up.

Well that’s it then

Those are the games that have been keeping me going through this COVID-19 isolation period. Hopefully it won’t go on for too much longer and we can get back to our regular lives. In the meantime please follow the guidelines, stay at home and most importantly BE SAFE!