A little something special for me in this post in the shape of Whirly Wheelers.

But before that I wanted to say that since my last post I’ve become a Grandfather. My first Grandchild, a boy, was born on the 30th June and he’s amazing. Now 19 weeks old, he’s teething and this morning he sat up on his own for the first time. He’s the happiest baby I’ve ever known and I’m really proud to be his Grandad. 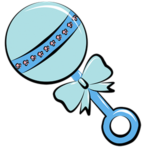 Whirly Wheelers was released by Palitoy Parker in the 1970s. The ‘game’ consists of four cyclists racing around a track with a different winner each time. Powered by two ‘C’ cell batteries the game is something of a collectors’ item these days.

Connected to the track via magnets placed on a large cog inside the unit are four cyclists. To move the large cog (and cyclists) is a long, plastic chain, moved via series of smaller cogs which connect to the motor. In the centre of the track is a dial which allows you to choose the number of laps to take place, or even an infinite position so the cyclists will keep going until the batteries run down. The best part? The cyclists legs actually pedal.

Whirly Wheelers wasn’t something I had ever owned but I was aware of the type of game having seen similar using a horse racing theme. 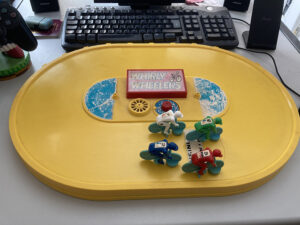 After changing the batteries it was obvious the motor wasn’t spinning. I opened it up to make sure power was getting to the motor, it was. The motor seemed dead. I decided to crack open the motor and do a little refurb work on it. I checked the coil wiring, cleaned up the bushes and reassembled the whole lot.

Unfortunately it didn’t occur to me to take photos of the insides as I was doing it, I just wanted to get it sorted.