Star Trek: The Next Generation Interactive VCR Board Game – A Klingon Challenge…

With the brilliant Star Trek Picard debuting this week it seemed a fitting time to drag “A Klingon Challenge” out for an airing.

For those unfamiliar with Atmosfear then it’s basically a board game accompanied by a VHS cassette that runs alongside the game. The video moves the story along by having a host character at the forefront of the story. The host manipulates the gameplay with obstacles thrown in player’s paths and challenges issued for the player to overcome.

What’s it about then?

Once the crew are out the way, Kavok steals the Enterprise with the intent of using it to attack Qo’noS, the Klingon homeworld, in order to start a war between the Klingon Empire and the Federation. It is the task of the players to stop Kavok before he can reach the Klingon homeworld and start a war. Oh, did I mention that the video acts as a timer? No, well you’ve got a time limit based on the video runtime.

Inside the box are a plethora of parts. First of all there’s the VHS cassette, then transparent plastic force fields, Bij cards, bridge cards, Holodeck cards, player pieces and stands, isolinear chips, and more. 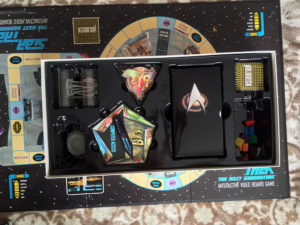 The game board is based on the layout of the Enterprise D with the player traversing the various corridors and passageways therein. Each player takes a rank card at the start of the game to determine their in-game rank. The ranks (alphabetically) are Cadet, Chief, Commander, Engineer, Ensign and Lieutenant. 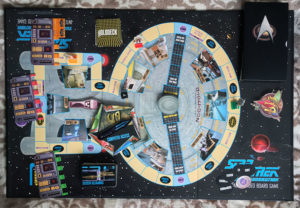 The video runs continuously with Kavok throwing down obstacles such as force fields and jammed turbolifts, slowing your progress as a result.

Help or hindrance can come your way via the various cards. Amongst the cards are: – 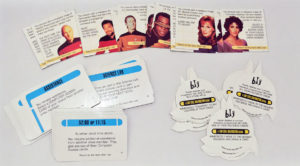 The game instructions state the object of the game as follows: –

At a speed of warp 9, it will take the U.S.S. Enterprise 60 minutes to reach the Klingon home world. You must accomplish your mission before the clock on the videotape reaches 00:00. If you succeed, you will save the Starship and the lives of your fellow crew members. If you fail, stop playing the board game and watch the videotape to see, hear and feel your fate!

The higher, the fewer. No, wait! The more, the merrier

The game definitely seems like more fun with more people.

Due to VHS players not being so common now-a-days, you may not have the equipment to play the cassette. For that reason I transferred mine to DVD a few years back. I also converted the video to an iPhone compatible MP4 to use on my phone. 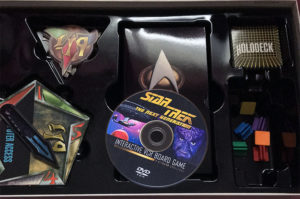 The full video is on Youtube if you have the game but no way to play the cassette.