I picked up some Nintendo Backpack Buddies from ALDI.

Backpack Buddies were not on the shopping list. The objective was to buy some bread rolls for my Daughter’s lunch today, however continuing to look around the store the next aisle offered up some Nintendo imagery. 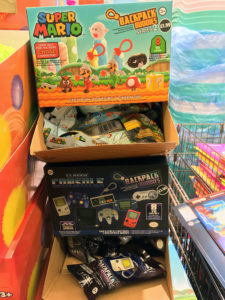 The younger generation might be familiar with Backpack Buddies but, being the wrong side of 40, these things are new to me. When I happen across something new to me like this both my gamer brain and Dad brain kicks in…

Gamer brain: Cool, Little versions of things I already own. Look at the detail on that. Do the buttons depress? I need to buy one to see how it compares to the original.

Dad brain: Waste of money. More plastic crap to get left gathering dust on a shelf.

More often than not Dad brain wins but not today friends, today gamer brain won so subsequently, I have two new pieces of plastic crap left gathering dust on a shelf. No, in all fairness for the cost of £1.99 each they’re not too bad. They’re a lucky dip affair where you take a pack to the till, pays your money and find out what you’ve bought once you’ve opened the pack. On the back of the pack is a picture of the various Backpack Buddies so you can see what you’re potentially getting before parting with your cash.

There were two different collections on offer, Super Mario and Classic Console although the latter consisted of controllers and handhelds. I picked up one of each in the hope of a Mario or Luigi from the first pack and a Game boy or NES Controller in the second pack.

Will it be a Mario or a Luigi? Alas, it wasn’t to be and hiding away in the first pack was a Goomba. 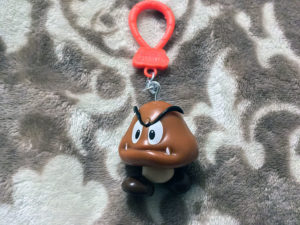 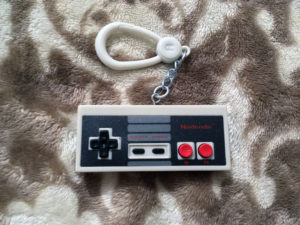 Woohoo! NES controller. The NES never really held much meaning for me, in fact (I may have mentioned this before) I’ve owned a NES for some years now and I’ve never played it. I don’t even own any games for it. That said the controller is an iconic piece of video game history and I love the aesthetics of it. Yep, I’m happy with this although I’m fast running out of space on my plastic crap left gathering dust shelves. 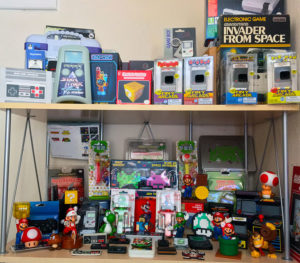 They’re not bad little knick-knacks for £1.99. They’re the kind of thing you may have found some years ago adorning the front of computer magazines, a freebie incentive to pick up the mag. Either that or on the counter of your local newsagent shop ready to take away kid’s pocket money.