While we’re in our third lockdown I decided to revisit some old favourites, but with a twist. The plan is to take a look at some of my all time favourite retro games but on a different system. Tonight I played Target Renegade on the Commodore 64. I have mixed feelings about it. 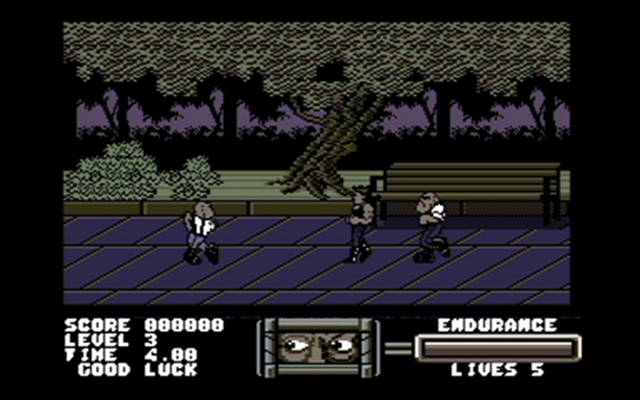 Target Renegade on the Commodore 64

The first obvious difference is in the sprites. Characters are chunkier and movement feels a lot smoother than the Spectrum version. Our main character resembles Kyle Blackthorne/Blackhawk from the SNES/32X/DOS game Blackthorne (Blackhawk in PAL regions) which I found a little jarring compared to other versions I’ve played.

Sprites feel limited throughout the game and a lot of the enemies from the Spectrum version are missing. This version feels like a cut down version of other formats. One thing I really liked with the Spectrum version is non-white Characters. OK, they’re represented as bad guys and thugs but at least they were there which was unusual for the day.

This is going to take some beating. I love the soundtrack from the Spectrum version. Now, I can tell it’s the original music and, in fairness, it’s well done for an 8bit machine but it’s no match for the Spectrum 128K’s AY sound chip. The most grating thing is the music doesn’t really fit with what’s going on onscreen. The Spectrum version kinda “flows” whereas the C64 version feels awkward. Most obviously to me is during the park level where the enemy repetition is awful, consisting of a skinhead and a shorter skinhead all the way through each screen of the level.

Sound FX?.. Hmm… From the title screen you get the option of choosing music or sound FX. That’s right, you can’t have both at the same time. I assume this is a limitation of the C64. I tried the sound FX but frankly, it sounds like a pinball machine. Not only that but I found myself humming the music because I was missing it in the game.

As above, sprite animation feels smoother than the Spectrum version with a much better colour palette but the overall playability feels limited. Flying kicks only seem to work on cyclists and to punch you must push in the direction you want to punch and press fire, what? Enemies are missing and those that are there are very repetitive. On the whole the game feels far more repetitive when compared to the Spectrum version.
Not only are there enemies missing but many of the weapons. The biker’s baseball bat is still there on the first level but no collectable gun on the prostitute level, no knives or sledgehammers on the park level and no snooker cues on the bar level.

The C64 version is one player only so no bringing friends along. From what I’ve experienced of the C64 I suspect owners didn’t have friends anyway… Ooh! Yeah, I went there. Nah j/k. I’ve played a few gems on the C64 so don’t all go cancel culturing me or whatever it is they do these days.

The C64 version is a bit of a disappointment. I have to give props for the C64 version cut scene after completing the game. The Spectrum version just jumps back to the start and you go through it all again so an actual ending reward was nice.