Frogger the board game

Frogger is a very well-known video game from the Golden Age of arcade. The idea of the game is to get your frog safely past flowing traffic on the highway, across a river by hopping on turtles and logs, eventually making it back to your swamp before repeating the process with more frogs.

This is a 1982 Milton Bradley (MB) Games attempt to translate that arcade game into a more traditional style board game. The game is for two players with a suggested age range of 7-14 years although I’m not sure it would provide much entertainment for a 14 year old of today (or even back then). 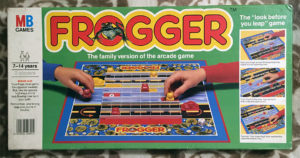 On the left of the Frogger box it states…

“Watch out! Your frogs must get to the opposite swamp. But, two dangerous highways and a fast-flowing river lie in your path. Remember, one wrong leap and you’re in trouble.”

…and that is essentially the premise of the game.

What’s different about it?

The game layout differs when compared to its arcade counterpart. The layout is mirrored, providing an additional highway and an additional swamp in order to accommodate two players. Each player chooses their frogs, red or yellow, and places them into the corresponding coloured swamp. The aim is to get all of your frogs into the opposite swamp. 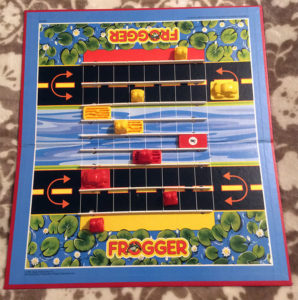 Gameplay is simple, controlled via a bespoke dice with numbers 1-4, “frog” and “log” rolls available. If you roll a number you can move one or more frogs, logs or cars that number of spaces. If you roll a “log” then you can flip over a log to reveal/cover a fly. Landing on a log with a fly by exact roll count, or occupying a log that is flipped to reveal a fly allows a frog to move an extra 2 spaces forward. Rolling a “frog” moves all frogs, including opponents frogs, 2 spaces forward. You can use your dice roll to move cars. If you move a car into your opponents frog then that frog must go back to its starting swamp.

Frogger the board game is good for a bit of quick fun but doesn’t have much longevity. It all gets rather samey in a very short time. I can’t imagine many 14 year olds taking an interest beyond the novelty factor. Still, that said, it’s another interesting board game for my collection and it’s still better than Ludo or Frustration.