I’d been happily using my Kangertech Subox mini v2 for a while now. That was until, while dropping a new coil in the RBA deck, I managed to send it skooting along the kitchen worktop and into the washing up bowl full of hot water. I dried it out and it worked OK for a few months but after that it started crapping out on me, intermittently not firing up, etc.
Fortunately my partner bought me a Vaporesso Target Pro for my birthday and I got a Vaporesso Gemini tank to go with it. Being an old skool gaming geek I just loved the retro Quickshot joystick look about it.

It’s been going great for me until last week when, while fitting the new coils, I noticed the negative pin had come loose, moving up and down in the slot. This was having an adverse effect on the resistance of my coils by altering the tension on the coils as the pin moved about. At this point I could either send it back, leaving me without a tank for a week or so, or set about securing the post. I decided to secure the post and it turned out a lot simpler than I thought it would.

I assumed it would be held in with a screw, most likely a Phillips or posidrive type. Initially I couldn’t see anyway to get at such a screw until I took a look through the airflow vents with a torch and realised I might be able to go in via the positive contact screw hole.

First I removed the deck from the Gemini tank and removed the coils as I would to change them. 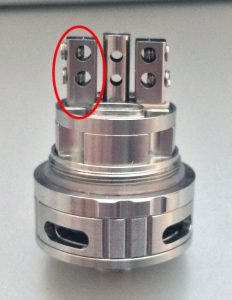 The negative post (circled) had come loose and began moving up and down in the slot.

The first thing I did was to turn the deck over to get to the positive contact screw (circled below). 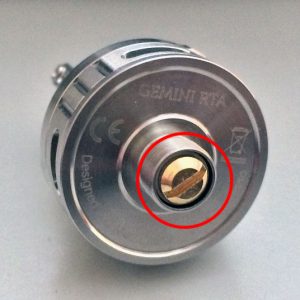 I then removed the positive contact screw using a small flat-blade screwdriver. 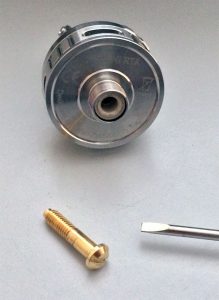 Next it’s over to the legendary blue screwdriver. I inserted it through the hole made by removing the positive contact screw and, by putting it a slight angle, I was able to tighten up the screw to the negative post.

After that I reinserted the positive contact screw and rebuilt the deck as normal leaving me with one working Gemini tank ready to fill with Goats Blood by V-Juice. 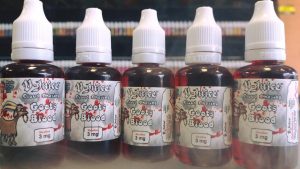