The last on my COVID Lockdown retro gaming list is another Spectrum favourite, 180 by Mastertronic.

While we’re in our third lockdown I decided to revisit some old favourites, but with a twist. The plan is to take a look at some of my all time favourite retro games but on a different system. Tonight I played 180 on the Atari XE. 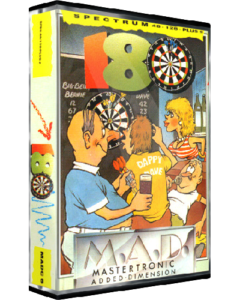 There’s not really all that much difference between these two versions. The Atari XE has an obvious lack of colour while the CPU opponent throws his arrows but otherwise, in terms of graphics, it’s pretty much an even match. It’s not like a darts game really needs a lot going on graphically though, is it?

I immediately noticed the music was there on the Atari XE and it sounded good. The real test for me was seeing if the XE had the digitised speech when throwing 180… and it did “ONE HUNDRED AND EIGHTY”. The sound effects of the dart being thrown felt a little flimsy but it was OK.

180 always had a strange control system, pressing up, down, left, or right makes the throwing hand move in diagonals. Apparently this is to simulate the aiming of real darts. It’s fairly straightforward once you get used to it. I find it easier to move the controller in circles to get an aim. The aiming system is identical on the XE apart from you need to place the hand higher to your target. Getting treble twenty on the Spectrum requires moving the hand to cover the bullseye, while on the XE you have to cover the treble twenty itself. It made no real difference to playability though, it’s just a case of adjusting.

Playing 180 on the XE didn’t feel all that different from playing it on the Spectrum. The tune-up mode was there, along with two player mode. I could easily play this version instead of the Spectrum without much adjusting required.