Not what I consider retro…

…but the original XBOX (or XBOX Classic as I often see it now called) is venturing into that limbo area between “current” and “retro”.

I never owned the original XBOX, I simply didn’t have the time to invest in one due to work and family life. I have, however, had an interest in maybe getting one for the emulation side of things. The idea of four player arcade emulation in the form of CoinOPS is something I think I would enjoy.

…my eldest son works for a local charity and a few weeks back an original XBOX was donated to them. It came with a couple of the large controllers, original power supply and a damaged video cable.

The damaged video cable meant that they were unable to properly test the XBOX even though it appeared to receive power and the optical drive ejected as expected. They were ready to bin it so I asked how much they would accept for it “as is”. They said I could have it for £8 and so I did. I reckoned even if the XBOX was scrap I could get my money back on the controllers. 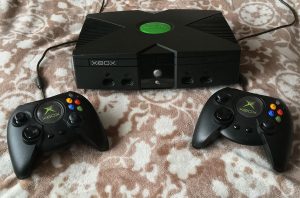 Having got my plastic bag full of XBOXiness back home I took a look at the video lead. I thought I may have to venture on to eBay to buy a replacement but it turned out to be just a couple of missing pins on the red and yellow RCA connectors (right audio and video respectively). I had some gold plated RCA connectors left over from a project I worked on a few years back.

Bought for a guitar amp set up originally, they wasn’t quite right for this job (to my OCD standards), but good enough for testing purposes nevertheless. I replaced the faulty plugs with the new RCA connectors and tested the XBOX. 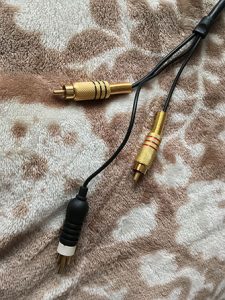 The XBOX dashboard loaded up fine and everything worked as it should. My lad picked up a few games for me to test the optical drive and they all worked as well.

I’ve since picked up a 1TB SATA hard drive, an IDE/SATA adapter from eBay, a 40pin, 80core PATA cable from Outer Erdington Micros and I made a power splitter from cables I took from a dead PC PSU.

I intend to mod the XBOX, drop CoinOPS on there and bash a bunch of old arcade games from back in the day. I may even chop that white RCA connector and replace it with one to match the others but that’s purely aesthetics and OCD.