An old friend invited me to his place for an evening of retro gaming with himself and a few of his friends. My friend asked us all to bring a retro console with us so I decided to take my Atari Jaguar along with the handful of games I could find, much being still in storage from moving house last year.

I’ve owned my Jaguar since just after it came out, so roughly 20 years. We connected it up to find it wouldn’t power up. “Oh well”, I thought, we’ll just have to manage without it and I can look at repairing it when I get home.
It was getting late so after an entertaining and enjoyable evening, complete with a variety of delicious pizza made by my friend’s girlfriend, I decided to look at the Jaguar the next day.

The next morning I tried powering up the Jaguar with a spare PSU in case it was that but still nothing. I cracked open the console and started probing with my multi-meter. I found nothing unusual other than it not switching on. At that point I decided to plug in a game cartridge. After owning the Atari Jaguar for over 20 years I leanred something new about it. The console won’t power on unless there’s a cartridge plugged in.

Anyway, while I had it cracked open I could see how simple it was to modify this 50Hz PAL model to run at 60Hz. After a bit of Googling to be safe, sure enough it’s as simple as removing a resistor. I decided I wanted it switchable between 50/60Hz but the shell didn’t allow much room for additional switches without interfering with peripheral devices or affecting the design of the shell.

One guy online had used a small rocker switch behind the right-hand fin and that looked fine but I wasn’t happy with how close it was to the 9v DC socket. The only other option I could see was what I refer to as the “lazy mod”, that is using one of those ugly metal toggle switches many modders like to use. Now, they’re fine if you’re trying to bring life to a series of body parts that you’ve stitched together or trying to touchdown a 1970s shuttlepod but otherwise my opinion is they’re just too ugly to be using for console mods.

After a little research I managed to find a reasonably sized, lockable push switch at Maplin. It’s a little bigger than I would have ideally liked but it done the job. 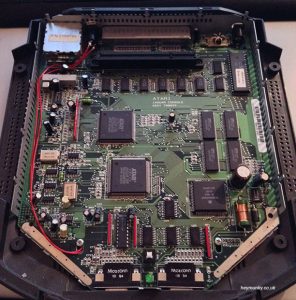 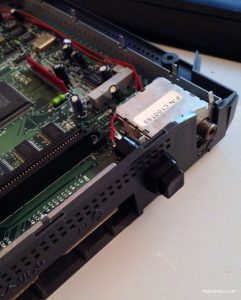